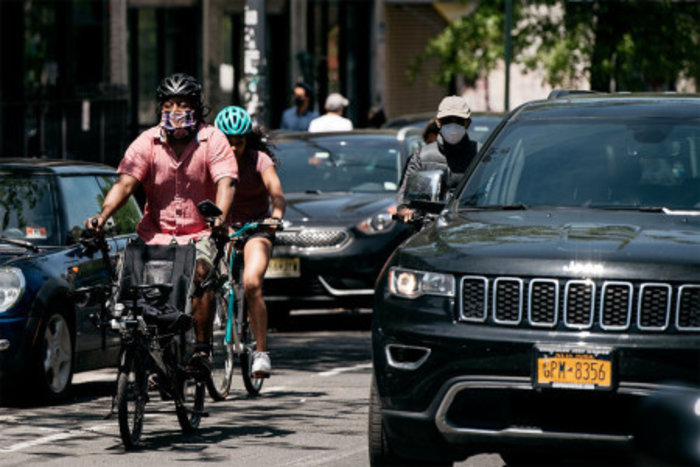 New York City’s future is unwritten, but all evidence points to two divergent paths — one buoyed by people biking and walking, the other crippled by unending car traffic.

These divergent futures are inextricable from the toll that COVID-19 is taking on America’s largest, densest city, and the fact that, for decades, the majority of New Yorkers have relied on public buses and subways to get where they want to go.

There are strong arguments that New York City’s death toll had more to do with officials’ slow response to the virus than crowded buses and trains, but nonetheless, the perceived risk of contagion on public transit is strong among New Yorkers. Two months into the crisis, ridership was down 93 percent. A recent poll found that nearly half of New Yorkers plan to avoid the subway entirely, even after the quarantine ends. And the New York Stock Exchange recently barred its 3,000 employees from riding public transit.

What does this mean for the future of the most transit-reliant city in America? It could go one of two ways — a bike boom or a carmageddon — and for a little while longer, New York City actually has a chance to choose what the future holds.

Declining public transit ridership is not the only transportation indicator to come out of New York City’s COVID-19 lockdown. Bicycling is booming, and all indicators point to more ahead.

A national poll by the Trek Bicycle Company found that, of Americans who own a bike, one in five are riding more than ever, and more than half plan to ride even more once the pandemic has passed. Market research shows that across the U.S. sales of bicycles, equipment, and repair services are double what they were last year. Sales of “leisure bikes” are up a whopping 121 percent. Even Google searches for “best bike” doubled.

This trend has not skipped New York City. In Williamsburg, Brooklyn, local bike shop King Kog sold four years worth of inventory in just two months. The New York City bicycle manufacturer Brooklyn Bicycle Co. reportedly sold 600 percent more bikes since the lockdown then this time last year. According to Trek’s survey, this is no coincidence. A full 85 percent of Americans polled said they thought biking was safer than public transit when it came to COVID-19 distancing.

The Threat of Carmageddon

But the bicycle is not the only physically distant form of transportation with newfound adherents.

Right now, car sales are down across the U.S. But in New York City, a few data points indicate a rise in residents buying cars.

Some suspect that parents coping with lockdown conditions and the end of childcare may be driving the trend. Upstand Movement, an organization that advocates for accessibility for families and pregnant people, found that a majority of parents and guardians polled were considering the purchase of a car in the near future.

That’s not all. While in the immediate aftermath of the shutdown, traffic levels plummeted, in the months that have followed, congestion has begun to climb. In recent weeks, the number of cars on New York roads rose by 25,000.

The Metropolitan Transit Authority has predicted that, at most, only 60 percent of their former customers will return to public transit this year. The remaining 40 percent adds up to some 3.5 million people.

If even a fraction of those people drove, New York City would grind to a halt.

What’s So Bad About More Cars On the Road?

In 2009, a data expert named Michael Frumin, currently the lead research scientist for Lyft’s New York City operations, asked and answered a terrifying question: What if everyone in New York City drove to work?

The amount of space needed for all those cars to park, Frumin concluded, is around 3.8 square miles, the equivalent of three Central Parks.

Back when Frumin was doing the math, the subway moved more than 1,000 people into the Central Business District every six seconds of the morning rush. Putting all those people in cars would add 324,000 vehicles to Midtown at once.

“At best, it would take 167 inbound lanes, or 84 copies of the Queens Midtown Tunnel, to carry what the NYC Subway carries,” Frumin concludes, “at worst, 200 new copies of 5th Avenue. Somewhere in the middle would be 67 West Side Highways or 76 Brooklyn Bridges. And this neglects the Long Island Railroad, Metro North, NJ Transit, and PATH systems entirely.”

And, of course, New York City’s population has only grown since Frumin made his calculations in 2009. Carmageddon indeed.

How to Control the Future

New York City is primed for two very different futures. In one, bicycling provides an option for the able, reserving public transit for those who most need it. In the other, the city stalls in unending congestion.

Which future we end up is a matter of the interventions, incentives, or disincentives offered to people debating either path. New York needs a leader to steer the ship away from unending congestion and toward a future where bicycling is a legitimate option for commuting and other trips. To change the future, you need to steer the now.

But so far, New York City Mayor Bill de Blasio has shown little willingness to take the wheel. While he begrudgingly closed a small fraction of city streets to cars, each is a disconnected city block or stretch of road intended for physical distancing alone, not transportation. A few “pop-up” bike lanes are included in this plan, but neither is enough to discourage driving or incentivize biking.

Mayor de Blasio’s disinterest in New York’s future is especially clear in comparison to his counterpart across the pond. In London, Mayor Sadiq Khan called COVID-19 the greatest challenge that his city’s transportation network has ever seen.

“We can’t see journeys formerly taken on public transport replaced with car usage because our roads would immediately become unusably blocked and toxic air pollution would soar,” Mayor Khan said in a press statement. “We will need many more Londoners to walk and cycle to make this work. That’s why these plans will transform parts of central London to create one of the largest car-free areas in any capital city in the world. If we want to make transport in London safe, and keep London globally competitive, then we have no choice but to rapidly repurpose London’s streets for people.”

Khan’s plan to avoid carmageddon includes reintroducing congestion pricing and raising the toll to disincentivize driving, and open wide swathes of city streets for walking and biking. He is not alone. Cities across Europe, Asia, and South America are closing hundreds of miles of streets to cars and opening them to people in an effort to prepare for post-COVID-19 commuting patterns. Paris and Bogota, especially, are refusing to ignore the coming bike boom and the threat of carmageddon. The former is opening more than 400 miles of bike lanes, and the latter is closing more than 120 miles to cars entirely.

All signs point to leaders around the world making confident decisions about the future of their cities. With walkable and bikeable streets, these cities have the potential to thrive in their post-COVID-19 recovery. Bicycling may be booming, but those cities that do nothing to embrace the bike boom will be stuck with carmageddon.

You cart is currently empty